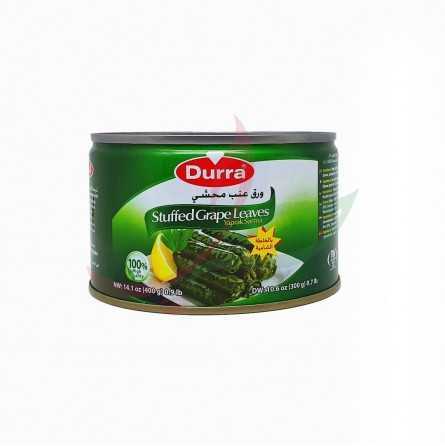 There is the vegetarian version, named in Syria yalanji (from the Turkish yalanci dolma meaning false dolma because without meat). It is served cold as an appetizer in the same way as the famous hummus and baba ghanouj. Light and so melting, the yalanji is made of vine leaves stuffed with a mixture of rice, onions, peppers (optional), spices, olive oil and a touch of pomegranate molasses which offers that tangy-sweet taste typical of this dish.

Then there is the rich version, served hot as a main course. Traditionally served on special occasions and large receptions. In Syria, this dish is called yabraq (from the Turkish yaprak meaning leaf), the vine leaves are here stuffed with a mixture of rice, minced lamb meat, spices and cooked in a lemon broth on a base of lamb chops and garlic cloves. Unlike the yalanji, which is thick and small in shape, the yabraq is long and thin. Rolling the leaves is tedious and time-consuming for novices, but becomes child's play with practice.